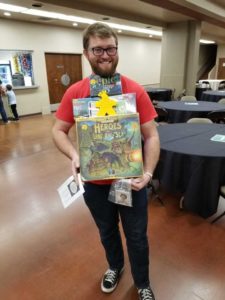 The Arizona Game Fair host a series of tournaments of popular games during the show. Players can play in a single tournament or collect points to compete for the title of Arizona’s Board Game Champion. They can also collect points in various dexterity games to become champion of the Arizona Finesse Trials.

The preliminary tournament schedule can be found on our Tabletop Events page. Tournament rules are at the bottom of this page.

Games
The following tournament games at the Arizona Game Fair will count as qualifying rounds for the Arizona Board Game Championship, and will award the players points. Points will be awarded by estimated playtime, regardless of the match finishing early. Games will have two rounds unless there are insufficient players. The first round for all participants, and the second for the winners of round one.

Points
Points for the Arizona Board Game Championships will be awarded as follows:

Players will earn points for each game they play, based on final place, and game length. The 16 players with the highest scores will be given the opportunity to join the Semi-Finals. This means that even if you do not take first in a game, you can still make it to the Semi-Finals. The Semi-Finals game will be chosen on the final day of the fair by dice roll from the following games:

Games
All dexterity tournament games at the Arizona Game Fair will count as qualifying rounds for the Arizona Finesse Trials and will award the players points. See the full list of games below:

Points
Points will be awarded as follows:

Final
Players will accrue points for each game they play, based on placement. On the last day of fair the players with the top 8 scores will be given a chance to complete in the Final, so even if you didn’t get first place in your games you may still make it into the Finals.

The Final will be a randomly seeded bracket tournament with the winner of the best two out of three games of Speed Jenga advancing to the next bracket, and the last player to not knock down a tower or run out of time becoming the winner of the Arizona Finesse Trials!

Game Rules
Rules for tournament games will follow the rules as written, accounting for any official errata or official FAQ clarifications. Starting player will be chosen by die roll. This die role will also determine seating order, or faction choice order for games that require specific seating. Games will be limited by time.

Time Limit
Game slots will be chosen based on recommended play time, games that run over will have 10 minutes to finish. Any games that do not finish in 10 minutes will be stopped and scored. Players are expected to take their turns in a timely manner to keep the games moving.

Game Completion
All games must be played until their end conditions are met unless all involved players agree to end the game early.

Game Start
Tournament games will start once every player has arrived or 5 minutes after the designated start time, whichever is first. Once the game begins, no additional players will be allowed into the games.

Abuse
If players are determined to be abusing the system, i.e. drawing out turns to win via time limit, all their points will be forfeit for the current game and they will be issued a warning. Repeated abuse will forfeit all points and possible participation in further tournament events. Abusive or overly aggressive behavior will also not be tolerated, as is laid out in the Arizona Game Fair code of conduct.

Learning The Game
Players are expected to be familiar with the rules of the games they will be playing. The games will be available to check out from Game Central for players who wish to view the rules or practice.

Entry Fee
There is no entry fee for AZGF Tournament rules.

Rewards
Each tournament game will provide a prize to the winner(s).

Arbitration
Any conflicts with game rules should try to be resolved at the table. If further adjudication is needed the AZGF tournament organizers will be the final moderators.